With winter coming, it’ll be much harder to work on larger projects in my house – mostly because the largest involve being out in my backyard or in my garage. So, I’ve been looking for small projects – especially those that can make my house look like it’s classier than it actually is (I know, I’m vain). Though my wife and I have no intention of selling our house (or at least any time soon) after buying it new less than a year ago, these small projects could increase the overall value of the house – a nice bonus.

As usual, I’m starting off small. As with many houses, our electrical switch plates are just plain, white plates. Replacing these boring pieces of plastic with decorative or custom plates is a cheap, easy way to class up a living room, foyer, kitchen, dining room or bedroom. Literally every room in the house will have a switch plate, assuming you don’t live in a medieval castle and still use candles as your primary light source.

This is as easy as undoing a few screws, popping off the plate, and replacing it with a new plate, covering the switches and wires. With white fixtures being trendy, it could just be replacing an off-white plate with a white plate, especially in older homes. 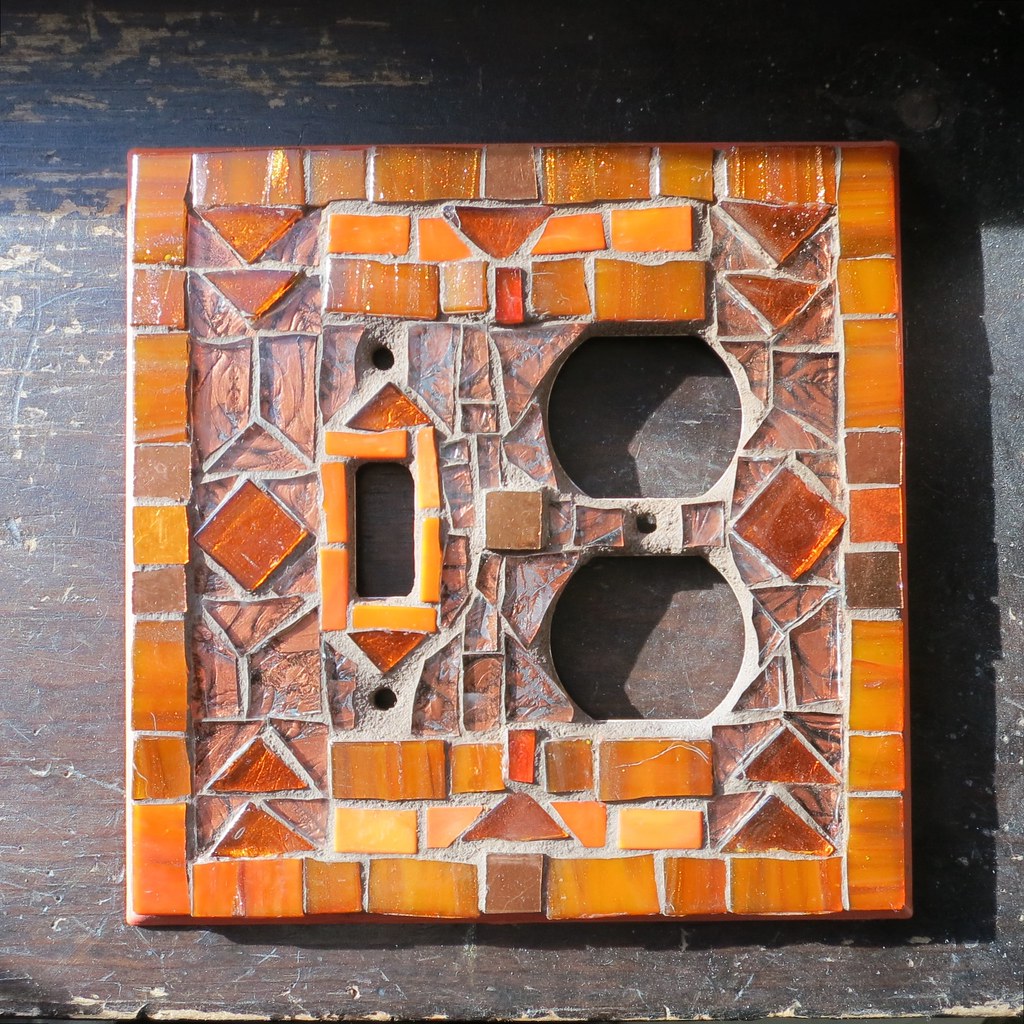 A little more complicated is changing out faucets. We were lucky in that we got to choose the faucets for our new house, but I’d still like to change them to something ornate. This might not be the cheapest option, and it’s somewhat involved, but it’s definitely doable in a weekend. The trick is to get faucets that match your existing fixtures, unless you intend on changing those out, too. I’ll need brushed nickel, for example, for all of the bathroom faucets.

Story time! The landscaping company provided us with two sad-looking trees for our front yard, as part of the cost of buying the house. They were drooping pines, that were clearly not going to grow to provide shade. Or grow, for that matter, as they looked unhealthy from the start. But, that’s what the landscaping company and homeowner’s association agreed on with the home builders. After multiple calls – never returned – and even a trip down to the landscaper’s office, we couldn’t get the trees replaced.

We looked into the HOA rules and discovered that we could indeed replace the trees, so long as they fell under a certain list of allowable trees. We chose maples – a red maple and a Japanese maple. Each one was about $120 – not a terrible price for trees. Conveniently, my wife convinced the landscapers, who were building another home on the street behind us, to remove the trees. That left us with two tiny holes in the ground. It fell to me to widen the holes, fix the irrigation, and plant the trees. It took about an hour and a half, thanks to the landscaping company doing half the work.

Luckily, the maples look far better than the dreary pines. The Japanese maple could use work, but it’s still healthier than the pine we had. 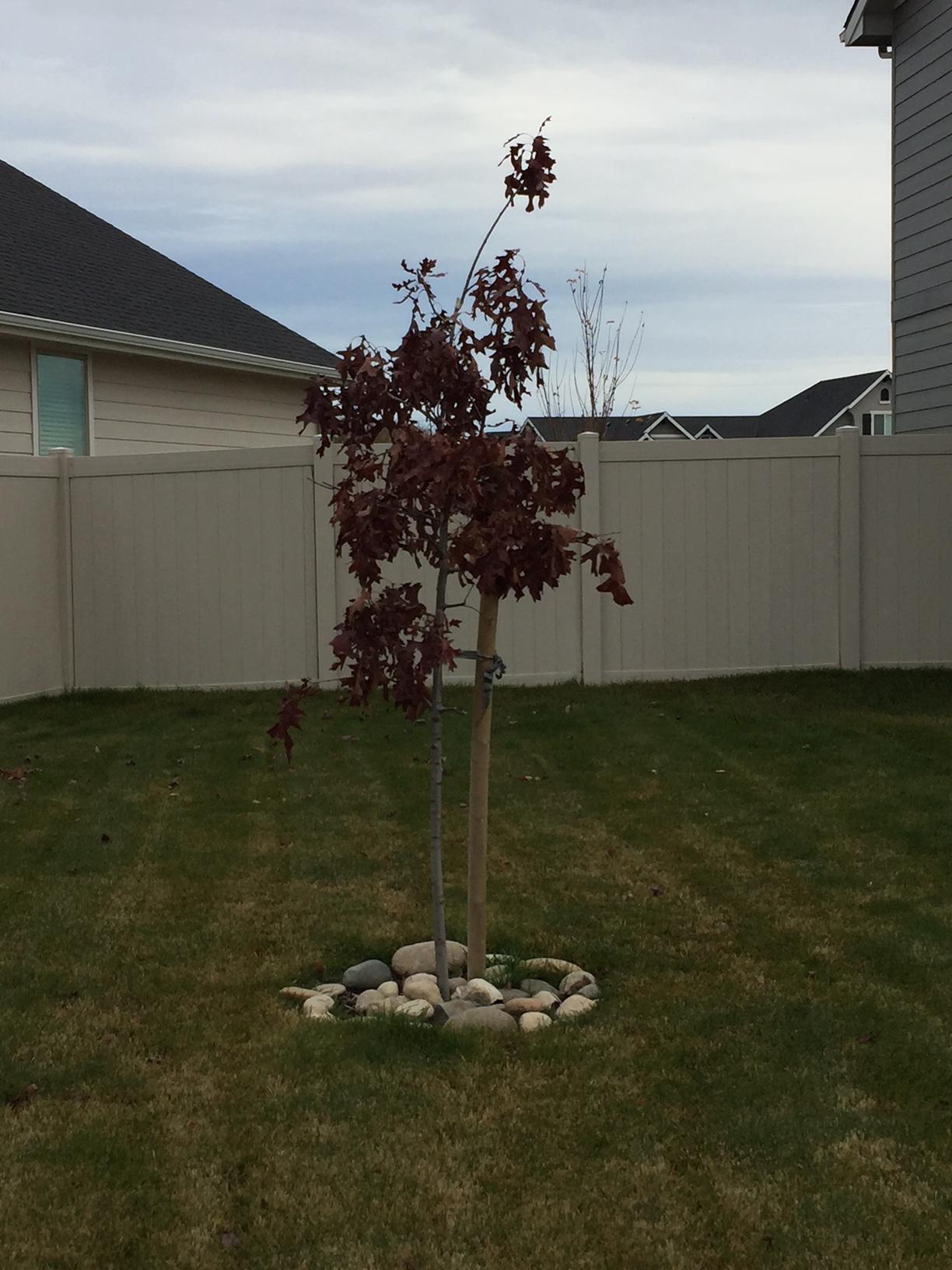 The moral of this story is that a different tree in your front yard can make a world of difference. Not just the color of the leaves, but the shape of the tree, as well.

I have a flat screen TV I’ve been meaning to put up on the wall for months. There’s not much of a reason to – we have a nice entertainment center stand that it sits on – other than my plan to frame it. After all, what does a TV show? Moving pictures. What do you normally do with pictures on a wall? Frame them. Logically, then, you should frame your flat screen and make it look like a large, classy picture. The trick – since making or buying a frame of the right size isn’t too difficult – is to ensure access to the TV.

The frame needs to be removable, and not flush with TV, in case you need access to the controls or any ports in the sides or back. You need to also account for any cords to the TV by cutting a slot in the back of the frame. Hanging the frame with a few saw tooth hangers will probably be easiest, allowing you to simply lift up the frame, fiddle with the TV, and hang the frame back on the wall.

I’ll admit, this is a bit of an odd entry to this list, but hear me out. I have a giant walk-in shower – seriously, I could throw a party in there – but there’s no corner seat. To me, it screams elegance in a shower to have a seat, especially made of the same tile as the rest of the shower. This won’t be hard for me, given that our house is new and we can just ask the builders for more tile to purchase. It may be harder if the house is older, though this could be the excuse you are looking for to re-tile the shower. In any case, it’s a nice touch that adds a bit of class, especially as it’s not strictly needed.

When we were looking for a house, my wife and I had planned to gut the stairs and make each step a mini-bookcase. That probably won’t work, given that we have the world’s biggest pantry under our stairs (Seriously – we could rent it out as a small bedroom. It’s ridiculous.). But, I happened upon a cool idea: ombre stairs. We would probably use a deep red – one of the colors prominent in our house – and gradually go lighter as the stairs go up.

Also at the above link, instead of the stairs being a bookcase, I’d love to turn part of the banister into book storage. Since I need to remove carpet to redo the stairs, I could do both projects at once, maybe repainting the banister to match the stairs, with a gradient of color.

It’s not too hard or expensive to class up your home on a budget, giving off an air of elegance. It may take a bit of elbow grease, but your home will look better, and your overall home value will increase.

I am big on recycling and repurposing things. I’m always willing to think outside the box.  Traditional Christmas trees are naturally beautiful and smell amazing.  And yes, I do opt for a real tree every year. But this year I wanted to add something that was a little different to my Christmas decorations. I had been seeing pictures… 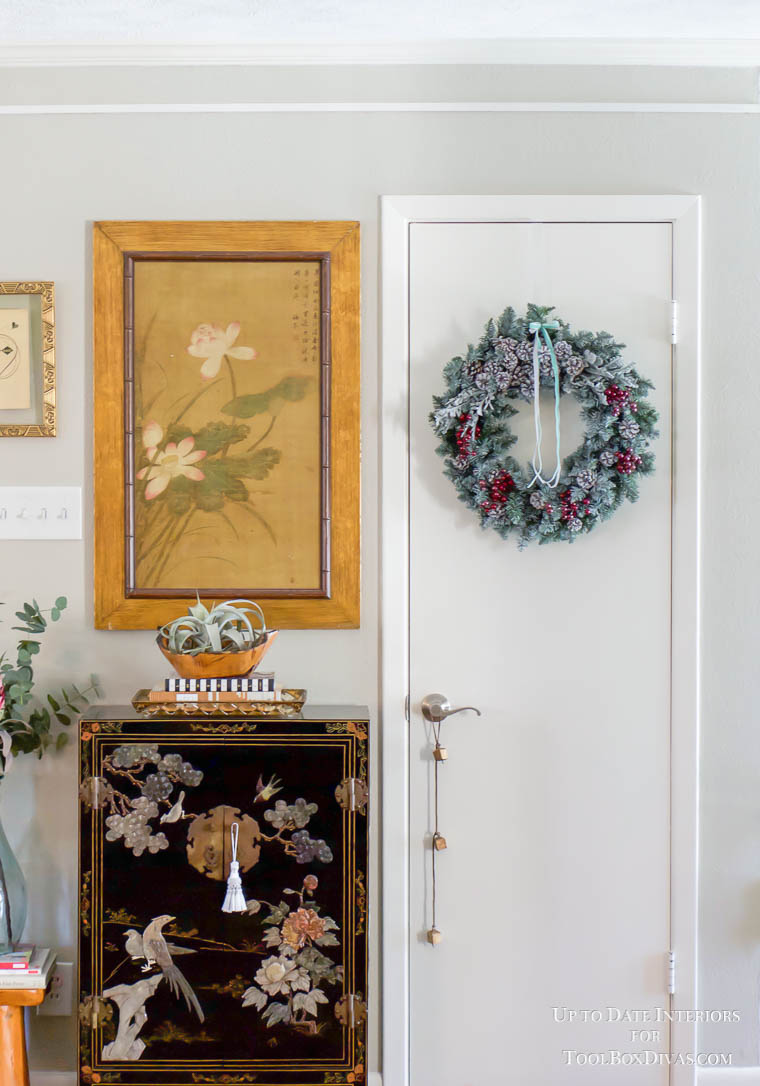 Winter wreath ideas perfect for the front door between Christmas and Spring.  Adorn your door by hanging a DIY frosted pinecone wreath with berries and velvet ribbon using spray paint and this quick tutorial. Happy New Year!  It’s Kathy from Up to Date Interiors and I’m thrilled to be back with Tool Box Divas to share… 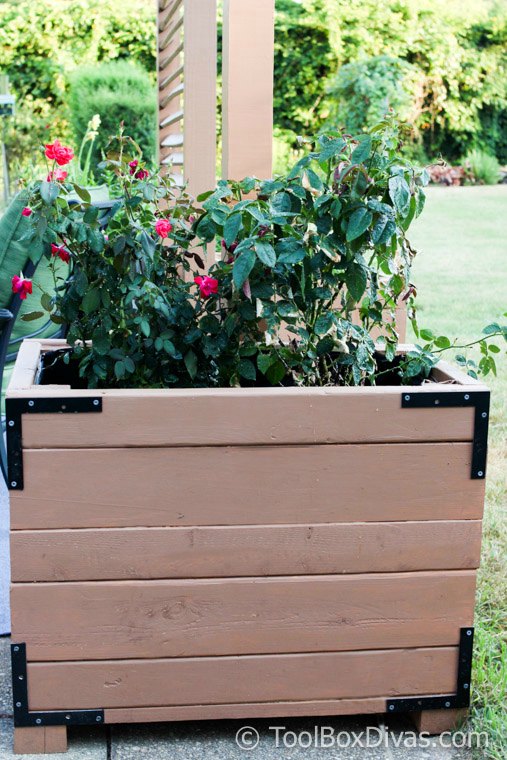 Using a circular saw and drill I will demonstrate how you can turn scrap wood into a large privacy planter for your yard. *This post is sponsored by The Home Depot. Last month, I was helping a friend redo his backyard. He had a patio that needed a lot of love.  Stay tuned for the full reveal.  But he…

A small living room is a crying shame, but give it just two electrical outlets and it can be turned into a space that fell straight from heaven. But a tiny bathroom? Ugh! Having to go without cabinets, counters, or wall space should be criminal! We need to be able to move around, and we… 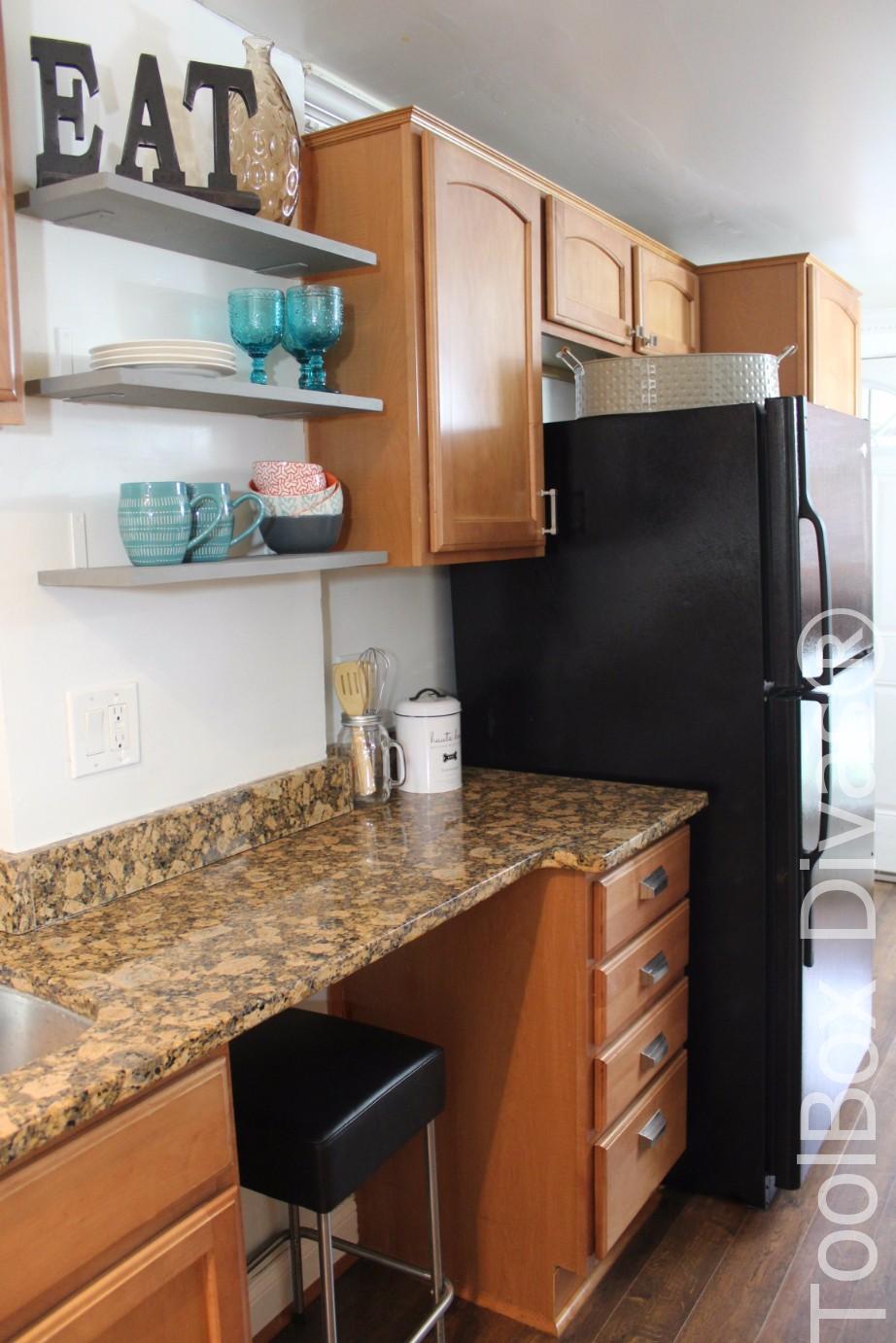 Often times we think we need to totally gut our kitchen or make drastic changes to add value and update it. However, sometimes all it takes is a fresh coat of paint and adding new hardware to the kitchen cabinets. In this article, I’m going to show how you can instantly add value and update… 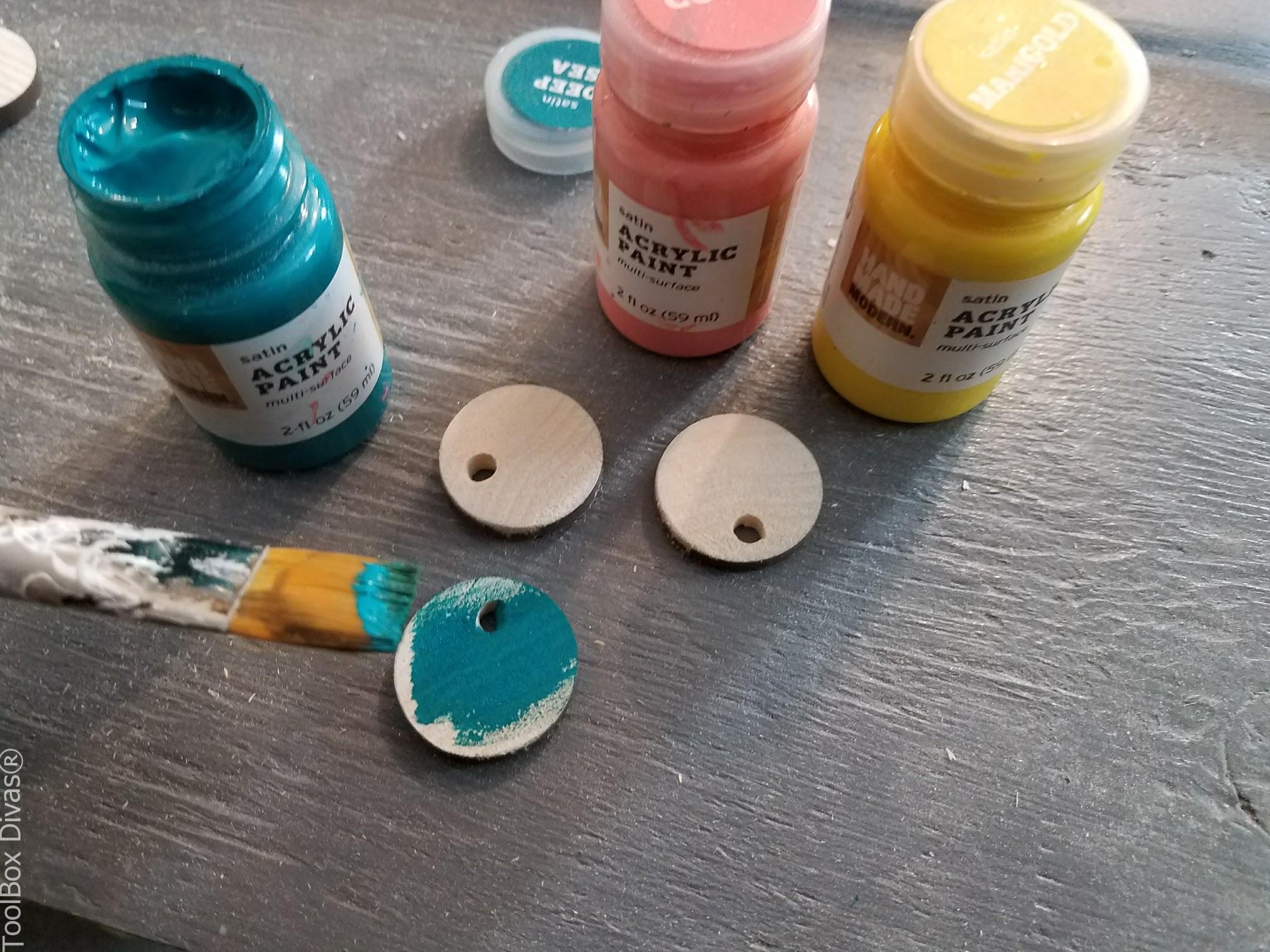 With the holidays come holiday parties.  It is absolutely the worst to be at a party, set your glass down, come back and there are two or God forbid 3 identical  glasses where you placed your drink.  If we were in grade school I’d saw who cares, its all the same.  But Ewww.  LOL if…