I’ve written about my need of changing my “gun room” to a nursery, and the time has finally come. My wife is a few months pregnant, so it’s time to clean the room and whip it into shape. Unfortunately, I didn’t take a before photo, so just imagine this room with boxes, and in the middle, there’s a rifle and shotgun. On the same page? Perfect. Moving on. 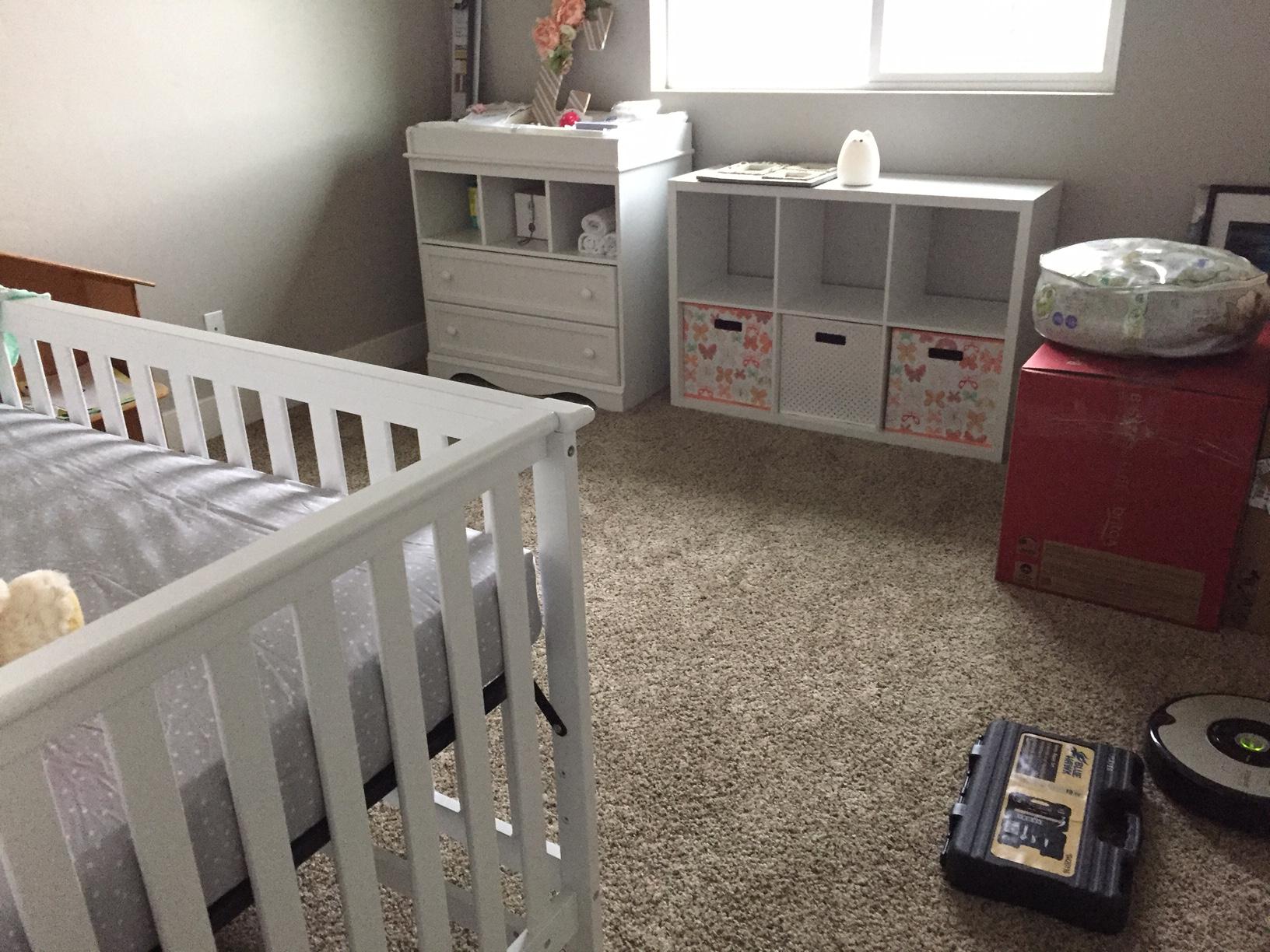 I’ve put together a store-bought crib and changing station, but I have a long way to go. Walls need to be painted. Decor and some toys need to be made. I can’t take credit for that fancy “C” – my wife did that for our gender reveal (We’re having a girl – Charlotte). Without further ado, here’s the upcoming weekend projects for my wife and I.

I am surprisingly good with a needle and thread (years of having to sew back on buttons to button-down shirts), so I want to make a stuffed Loch Ness monster. It’ll provide a nice seat and a toy, all in one, for my soon-to-be-born daughter. It will be something she can latch onto and play with for years to come. 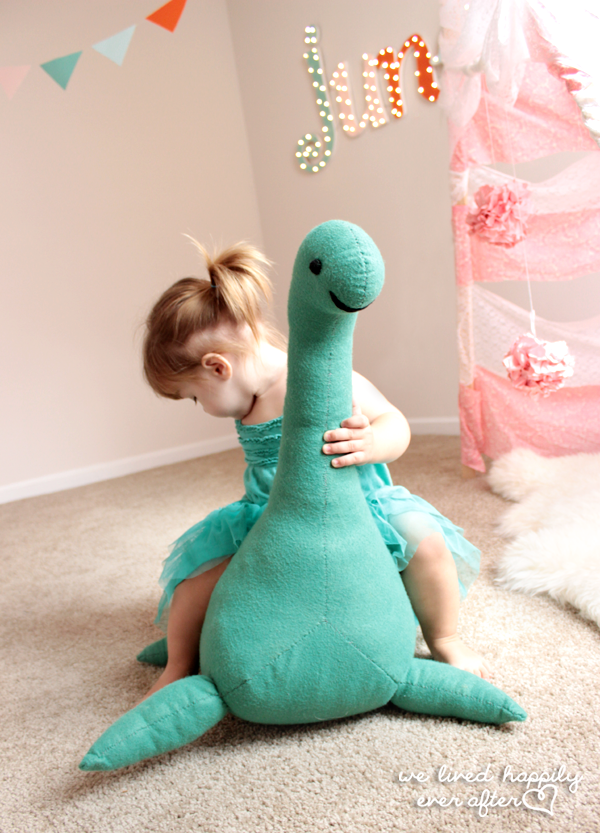 (Photo courtesy of We Lived Happily Ever After)

Look, a grown man who built his own rifle can still appreciate cute things, especially when they are being made for a daughter. So the next cute thing is a fox lamp. This builds on the same skills as the toy Nessie – sewing and stuffing. Then, some fabric stiffener and a string of LED lights. LEDs are best for a nursery as, unlike incandescent bulbs, they don’t get hot. Wandering hands can’t get burned. The fox lamp is also much more resilient than a floor or desk lamp, as it can fall and not cause any damage – it’s stiff fabric and stuffing, which isn’t exactly heavy.

You are probably sensing a pattern by now. The next project, an elephant doorstop, is a bit trickier, as it could pose a potential danger to a new little one, being heavy and literally filled with rocks. Pebbles, technically, but it’s still a solid object. While I’m not too worried, it’s still something to be cognizant of.

The last animal-related project, giraffe art. I love working with wood, and my wife is pretty talented when it comes to drawing and painting. I’ll handle the woodwork (it won’t be hard – a few planks, some nails, sawtooth hangers). She can do the actual art. (Photo courtesy of Make It & Love It)

The window of the nursery is fairly wide,so rather than buying curtains, I would rather make my own. Plus, this way, I can use whatever pattern or fabric I want. If I’m being honest, it will probably either be animals or just plain colors. What I like about these suspender curtains is that I can pull them up and let sunlight in without them being in reach of tiny hands, and might accidentally yank down the tension rod.

Washi tape makes it incredibly easy to spruce up something like a table. But I’m combining two of the tips for a washi tape table: First, I’ll cover the table in some sort of pattern. The jury is still out on what, exactly. But, the second part, on top of that, I want to design a play area. Maybe, as at the link it will be roads for toy cars. Given the animal theme, it’ll probably have animal print. Maybe I’ll figure out a way to make it look like a tea set for stuffed animal tea parties.

(Photo courtesy of Momma.Poppa.Bubba.)
I’ve already faced down the biggest hurdles of the nursery – the furniture – so with these projects, I should be able to add some flair to the room. It’s certainly a far cry from the “armory” that the room has been since we moved into the house. Time to go get a bunch of felt and brush up on my sewing skills. 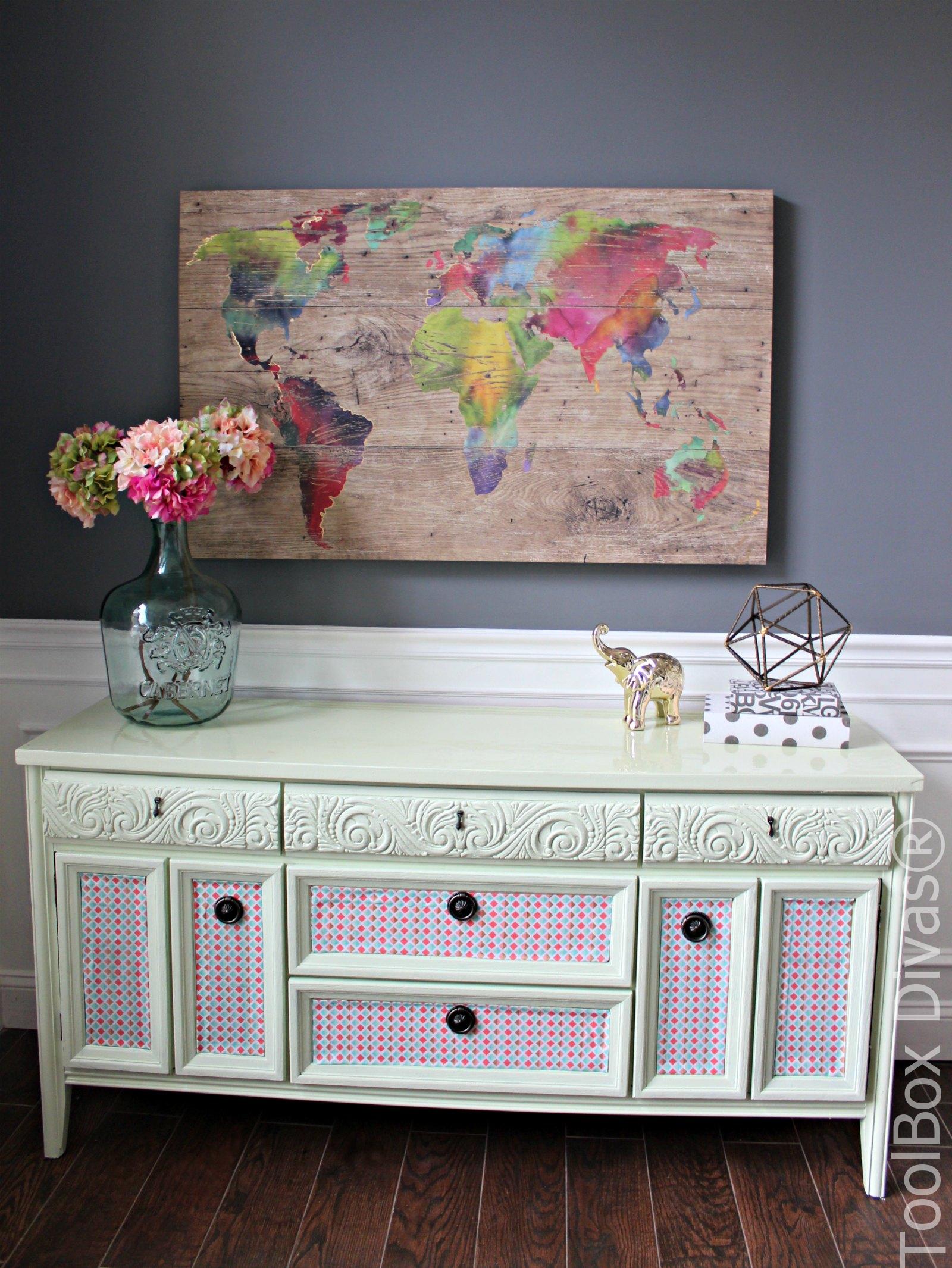 One fateful day I was perusing around my local thrift store, as I normally do 😊, when I rolled up on this beauty or rather homely thing. It had definitely seen better days. But it was $50 and I needed a buffet cabinet for my dining room. Despite its ornate nature, it had good bones… 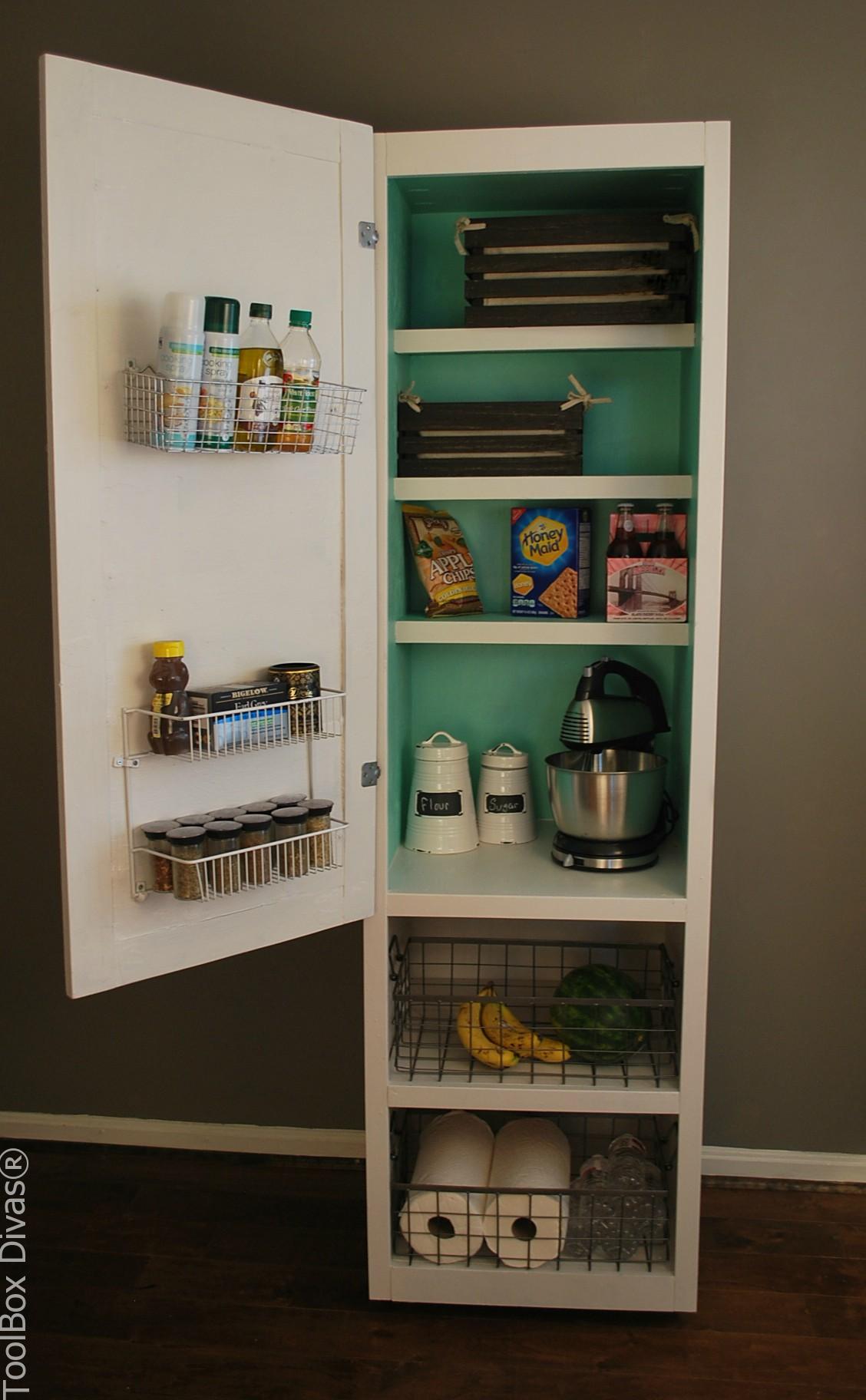 Hey Everyone, it’s been a while since I’ve actually been in the garage  a.k.a. “my workshop” building things.  But I am now back at it.  I found myself in the position were I didn’t have any place to store small appliances and my pantry space was very limited.  In fact,  I have one split cabinet… 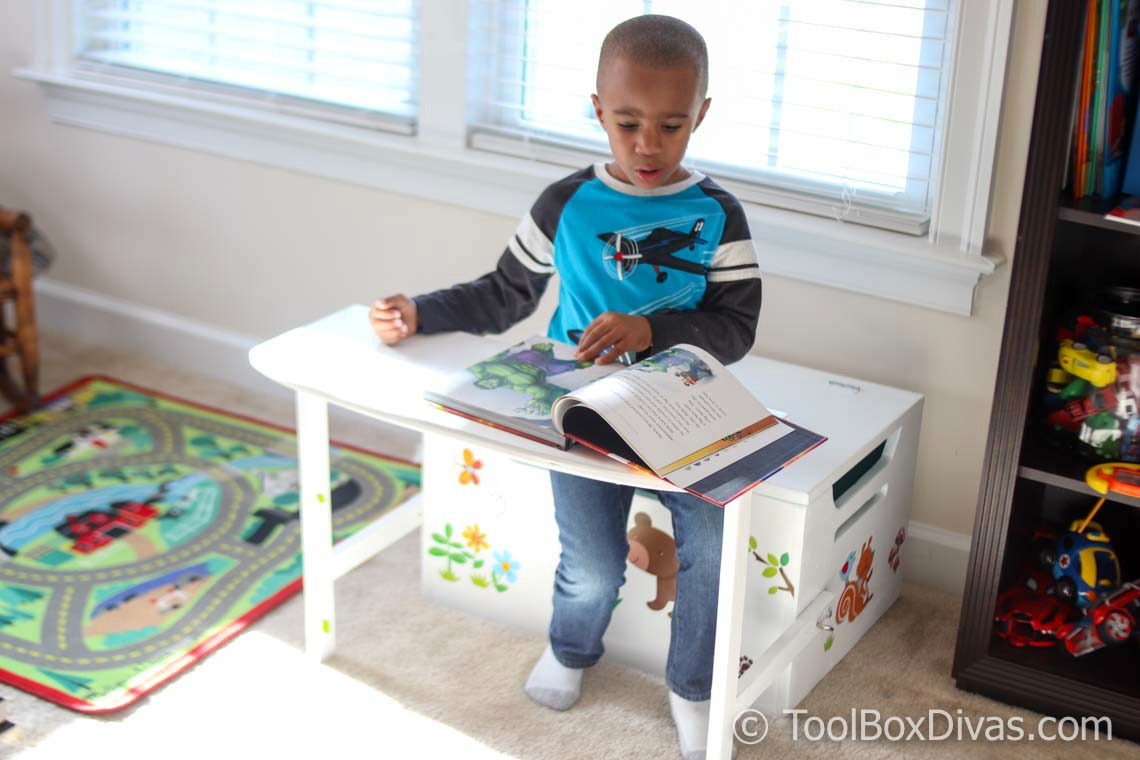 Be inspired by holiday-themed projects, like this 3-in-1 bench with toy box storage that converts into a desk. The post is sponsored by BuildSomething.com and Kreg Tool as part of their Holiday Campaign sharing holiday-inspired projects. During the holidays’ kids can collect a lot of new toys; toys that can easily create clutter and chaos.  Having a place to put away the…

It wasn’t until I came to the frustrating conclusion that due to the sheer volume of customers it would be weeks before I could get a mechanic to replace my winter tires, that I started to take a long hard look at all the different projects that I pay others to complete on my behalf… 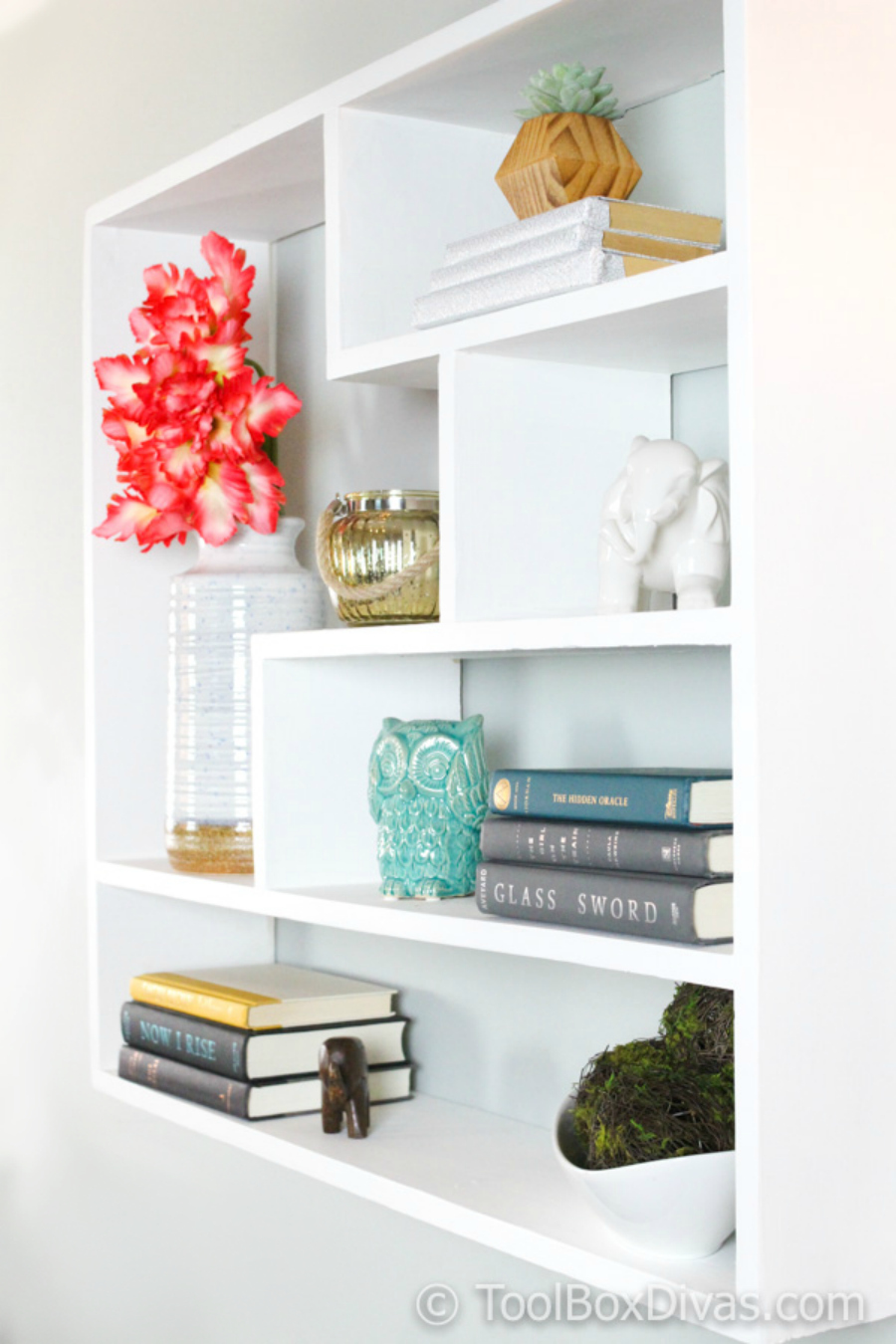 How to make a DIY floating bookshelf or bookcase. Hey Guys!  I’ve teamed up with Buildsomething.com to offer free plans for a floating wall mounted bookshelf that is so versatile it can be used in any room of the house. Whether you’re a book lover or you’re just looking for additional storage, bookshelves or bookcases are always helpful. ***This…

Going to a pub for a beer or two during a work week is a real treat for every beer lover. Today, with the rise of small breweries, we have an honor to taste hundreds of craft beers from the whole world. But have you ever asked yourself what it would feel like to start making…